PROOF: Here's Why Working for the Man SUCKS 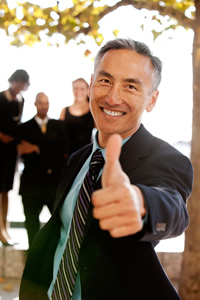 I used to dabble in multi-level marketing (MLM) schemes back in the day… I was always trying to figure out how to make a quick buck with little effort. Suffice to say, that never seemed to work out.

But one common theme phrase I picked up from these MLM types was to ‘model successful people’. In other words, find someone whose successful and copy what they do.

If financial wealth and prosperity is what you’re after, I have some eye opening ‘ah-ha’ moments for you.

Back in 1992, the IRS began releasing data on the 400 taxpayers with the HIGHEST adjusted gross income (wealthiest people in the U.S.). The most current one that was released is for the year 2009.

To make it into the top 400, you needed $77.4 million in adjusted gross income, although, the average earnings were $202.4 million buck-a-roos.

According to the IRS, this is how the TOP 400 taxpayers earned their income in 2009:

In case this ain’t making any type of sense to you, let me break it down…

In order for you to get your $500 paycheck on Friday, that meant you had to put in 40 hours of hard work. You might had to drive one hour to work in the morning and one hour in the evening to get back home. You had to pay for the gas to get  to work and back; and you had to pack a lunch or eat out. After all of that, you collect a wage or salary. For most of you, this is where the BULK of your income comes from… If you don’t go to work, you don’t collect a check.

As you can see in the breakdown above, only 8.6% of the super wealthy’s income comes from a job…. In other words, if you want to become RICH — you shouldn’t be working for ‘the Man’.

Plus… the working man or woman who earns a wage/salary will have more money deducted out of their pay check than the guy earning income on capital gains… I’ll explain later.

13% of their income came from dividends… Dividends are a sum of money paid regularly by a company to its shareholders out of its profits. If you own stocks, you could receive ‘dividends’ (income).

19.9% of their income in 1999 came from partnerships and/or corporations. These folks might have started up companies or became silent partners by investing their money into these companies and now they’re earning income from it… For example, if someone from this group of 400 had income of $100 million, nearly $20 million of that money came from partnerships/corporations. It pays to have your own business!

45.8% of the super wealthy’s income came from ‘capital gains‘… A capital gain is the difference between what you paid for an investment and what you received when you sold that investment. If you made a profit on the investment, then you have a capital gain. Capital gains are profits you earn through buying and selling capital assets. Capital assets include things such as stocks, mutual funds, bonds, real estate, precious metals, coins, fine art, and other collectibles. Wages, interest, and dividends are considered ordinary income, not capital gains income.

For the super wealthy, they figured they’d keep more money in their pocket if their income came from capital gains… Capital gains are taxed much less than a typical wage earner… In other words, the 40-hour work week guy or lady will have more deducted from their check than the guy/lady who earns income from capital gains…

To make good money, you need to leverage both your time and money… You gotta get your money to work for you instead of you working for your money.

The average Joe or Jane’s income breakdown will look like this:

Seriously, working for the man will keep you in the poorhouse.

There are so many benefits to owning your own business and generating business income will create much more opportunity and finances to get yourself into many other types of investments — I’m a HUGE antiques guy. I buy and sell antique chairs… Instead of letting all of my money sit in a savings account earning pennies, I purchase antique chairs and resell them.

Whether it’s starting a t-shirt business or starting an earthworm composting company, do whatever makes you happy. Whatever actions you take today towards reaching your goals will set in motion the life you’ll have 5, 10, 15 or 20 years from now.

If t-shirts is your thing….. Take a look at our course – my experiences will help you move along faster!